The Maddening Expanse of Grace

But the Lord said to Jonah… “Should I not have concern for the great city of Nineveh, in which there are more than a hundred and twenty thousand people who cannot tell their right hand from their left—and also many animals?”

The last thing in the book of Jonah – after the final chapter, trailing the ending word – is a question mark.

Jonah 4:11 wraps up a strangely open-ended conversation between the God of Israel and his recently-rescued prophet. And this final inquiry – the question mark that concludes the book – raises a matter bewildering implications: Can people dictate the terms of God’s grace?

On its own, it’s always surprising to hear God asking questions. After all, why should God need to ask a human being anything? What information does God lack? How on earth can persons instruct the Creator of the world?

The question that concludes the book is there to teach Jonah – and to reveal to you you and me – the stunning vastness of God’s redeeming grace.

Jonah, may I have concern for this great city?

Is it okay with you if I show pity on who I wish?

Do you know better than me where my mercy should be applied?

There are a number of different ways that a person could outline the book of Jonah. One of those ways would be by mapping the recurrence of one small but important Hebrew word – the noun ra’a –through the story.

Ra’a. It means “evil” or “wickedness” or “punishment” or “destruction”. Some translations prefer the English “disaster”.

In Jonah 1:2, the text says that God has seen the ra’a that the Ninevites’ bloodthirst has brought upon the world. In 1:7, the narrator has the sailors on Jonah’s ship ask if he is responsible for the ra’a that has befallen their boat. 3:10 indicates that God had planned to send his own ra’a on Nineveh.

This ra’a, this blackness, lives in the story as an kind of malevolent spiritual cancer. It travels – it looms – in the story, moving from place to place, person to person, and plan to plan.

Finally, in 4:1 – after God spares the great city – the ra’a surfaces a final time. And on this occasion, the catastrophe lodges in Jonah’s heart. The forgiveness of Nineveh, the author says, seemed a great ra’a to Jonah.

For Jonah – who had staked his reputation on the fiery punishment of Nineveh – God’s grace brought with it a different kind of disaster. As Jonah experienced it, the forgiveness of Assyria’s capital was a personal evil. It was a humiliation that undermined his prophetic authority. And God was to blame.

Nineveh was forgiven. And Jonah was furious.

Instead of a Sodom of conflagration upon the wicked town, there was only a scorching sun of bitterness within the preacher.

It was too much, this grace. And Jonah wanted God to kill Jonah where he stood.

(Among the many ironies to be found in Jonah’s story: Here is a man who was swamped in the sea before praying that his life might be saved. Flash-forward to chapter four, and the same guy is high, dry, and praying that he might die!)

And yet…maybe Jonah should have seen this coming. Those of us who are reading his story carefully certainly should.

Because Jonah’s tale, in all of its high-leverage moments, is a story about God’s audacious love for sinners. As the hurricane threatened to take down their Tarshish-ship, God showed mercy to a group of pagans who were actively worshipping false deities. God provided a fish to rescue Jonah in the stubbornest depths of his coldhearted rebellion.

And now, Nineveh, Sin City, was going to escape judgement, too.

And Jonah hated it! This, after all that had happened to him! After all the effort he had put forth! After all the time he had invested! After all his longsuffering in the face of sinners! To give grace to Nineveh now? What could be more infuriating?

Are we ready, church, to really understand grace today? I’ve always loved this quote by David Martyn Lloyd-Jones: “If your preaching of the gospel of God’s free grace in Jesus Christ does not provoke the charge from some of antinomianism, you’re not preaching the gospel.”

What does that mean? It means this: You haven’t known the fullness of grace until you’ve been offended by it. You don’t really understand mercy until you reach the point where you start to wonder if God might actually be okay with “anything goes.”

We don’t appreciate God’s love until we discover that – despite our assessment of the town – Nineveh doesn’t always get the same treatment as Gomorrah. Quite the contrary: Nineveh can become Jerusalem, the Holy City of God, the place God that chooses for his name to dwell.

If this gets your teeth grinding, join the club. It makes me upset, too. How is it that other people can be the recipients of God’s love, after they have done so much less for God than I have?

I’m not proud of myself in these moments. They speak to my tendency to chronically underestimate the horizons of God’s grace.

In Jonah’s story, God makes the point by providing – and then destroying – a tiny vine to shelter the sulking prophet’s head. Here today, gone tomorrow. But Jonah felt himself entitled to that plant. And when it died, he was even angrier than before.

It’s devastating, that little moment of satire. Who of us hasn’t been get bent out of shape over the thin leaves of life?

Recently, I was at the meeting of an organization that is important to me. As I see it, I’ve showed this group loyalty and service and support for a long time. But over the course of the gathering, I saw a number of other people – younger people, newer people, maybe-less-orthodox people – receive prime positioning and honor.

They got the platform. They got the face time. And I burned a little bit inside: How is it that they just waltz in here and claim these roles?

(By the way, have you noticed that people we don’t like always “waltz” in? All scandalous people, it seems, move about in ¾ time.)

Where is my reward? What happened to my vine?

We sometimes think that God is working from a finite cache of grace and love. If God spends it on those undeserving others, we intuit, then there will be less attention for people like us. We sing all kinds of songs that say things like “his love has no limit” and “his grace has no measure”, but in our frustration at God’s freewheeling grace, we start to wonder if maybe the well is starting to run dry.

“But while the younger son, the prodigal one, was still a long way off, his father saw him and was filled with compassion for him; he ran to his son, threw his arms around him and kissed him.

The son said to him, ‘Father, I have sinned against heaven and against you. I am no longer worthy to be called your son.’

But the father said to his servants, ‘Quick! Bring the best robe and put it on him. Put a ring on his finger and sandals on his feet. Bring the fattened calf and kill it. Let’s have a feast and celebrate. For this son of mine was dead and is alive again; he was lost and is found.’ So they began to celebrate.

“Meanwhile, the older son was in the field. When he came near the house, he heard music and dancing. So he called one of the servants and asked him what was going on. Your brother has come,’ he replied, ‘and your father has killed the fattened calf because he has him back safe and sound.’

“The older brother became angry and refused to go in. So his father went out and pleaded with him. But he answered his father, ‘Look! All these years I’ve been slaving for you and never disobeyed your orders. Yet you never gave me even a young goat so I could celebrate with my friends. But when this son of yours who has squandered your property with prostitutes comes home, you kill the fattened calf for him!’

“‘My son,’ the father said, ‘you are always with me, and everything I have is yours. But we had to celebrate and be glad, because this brother of yours was dead and is alive again; he was lost and is found.’” 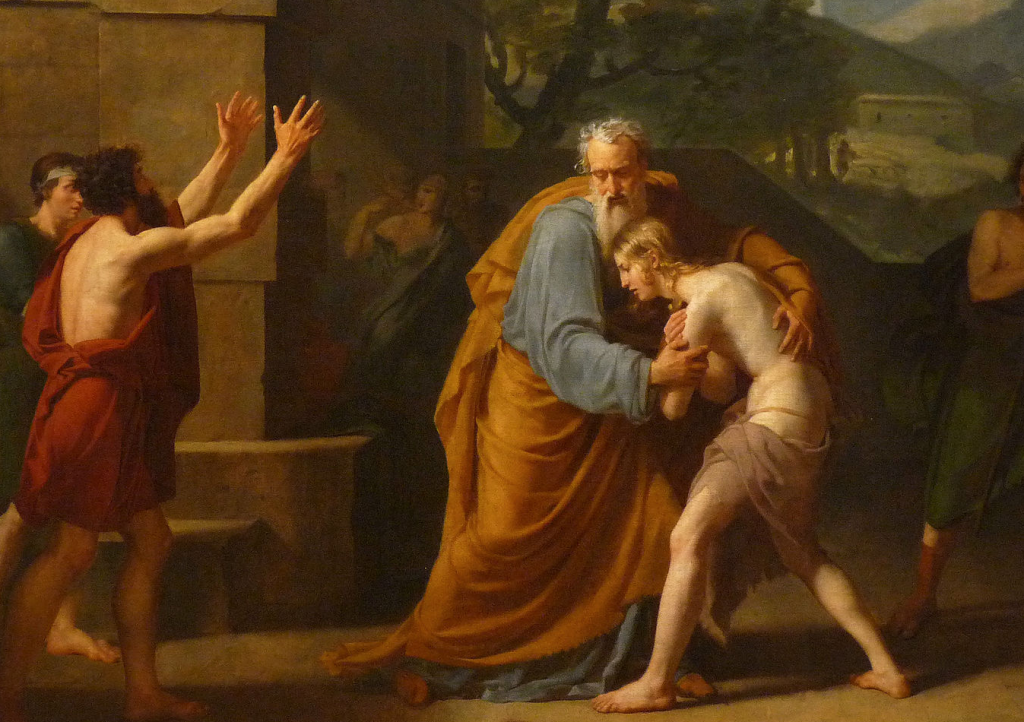 All God has belongs to the Older Brother. All God can give is ours.

All this is offensive. And all this is beautiful.

His grace takes the dead and makes them alive.

It claims the doomed and calls them delivered.

It gathers in those with bad theology, bad morals, bad behavior.

And at the same time, God comes to us, working in the field or watching from our sun-shelters of self-righteousness. God approaches us, the self-appointed martyrs posted east of the city and asks: May I yet love sinners such as these?