How Trust is Built

“Lord, if it’s you,” Peter replied, “tell me to come to you on the water.”  “Come,” Jesus said. Then Peter got down out of the boat, walked on the water, and came toward Jesus.

Trust is the lifeblood of leadership. It doesn’t matter if the leader is trying to manage a business, lead a province, shepherd a church, or coach a team. If a community or enterprise is going to move forward, the leader’s core group must trust her.

On this much, the leadership literature and the TED talks agree. But trust remains enigmatic. How can it be described? What constitutes trust?

On what basis do people disregard all that’s known about water and attempt to stand on the sea?

Trust is complex. It’s a feeling, but it’s more than emotion. Trust is a nuanced sacrifice of control for the sake of a greater outcome.

This means that trust is rarely an all-or-nothing proposition. While people often liken trust dynamics to on/off situations (“I just don’t trust you.” “You simply don’t trust me.” “There is no trust in this system”), these descriptions oversimplify reality.

In fact, trust rarely exists in binary state. Trust is a dial, not a light switch. It’s measured in degrees. There are seasons of growing trust and there are moments in which it erodes. (Generally speaking, growth in trust occurs much more slowly than loss of trust, but in moments of crisis, trust can be earned or lost more rapidly).

It’s simply not true to say that we “trust someone completely” or “don’t trust someone at all”; it’s always about how much we trust.

It’s also about where. Most people don’t have across-the-board trust scores; we tend to trust people with some jobs more than with others. You might trust the neighbor kid to remove your computer virus, but you’d never allow him to work on your car’s brakes. There are people that you trust to prepare your salmon but not to babysit your grandkids.

All this means that leaders have the opportunity – and, indeed, the responsibility – to cultivate trust. There are skills, postures, and principles that can cause trust to grow, even in anxious systems. The Peters around us will leave the stern for the sea if the right amount of trust can be established.

Colin Powell, citing an instructor in his infantry school, once said that leaders must cultivate so much trust that others will follow them, even if it’s just out of curiosity. It seems like this is precisely what happened with Peter: What might be possible for me if I trust in Jesus?

So what modes of leadership and constituent elements deepen trust this way? On what basis does a disciple get so curious that he will defy all nature and try to step onto the sea?

It seems to me that trust – both in Peter’s case and in our own context – rises when leadership integrates (at least) these four parts:

Compassion: People trust – and are therefore more willing to follow – leaders who take time to understand them. Trusted leaders have genuine empathy for what others are experiencing. They appreciate the anxiety, disorientation, and regret that can curtail bravery and change. These leaders are able to identify the concerns of their people and then to encourage them onward, leading in a matter that shows that they have the best interests of their followers in mind.

In the case of Simon Peter, Jesus moved toward the disciples from a position outside the storm. That’s important. Matthew 14:23 says that Jesus had previously been praying in a place that was safe from the wind and waves. But when he saw the disciples struggling from a distance, Jesus made a decision to join them in their battle against the gale. Their leader entered into the disciples’ struggle, modeling compassion in the heart of the storm.

Simply put, trust grows when leaders who might otherwise exercise the privilege of absence attend to the fears that accompany major change.

Confidence: Trust is invested in persons who demonstrate unwavering faith in their mission. This sort of confidence is not egotistical or self-assured; it is a conviction that the work will succeed and that the structure, methods, and aims are sound.

This dynamic plays out every time unseasoned airline passengers encounter mid-trip turbulence. Their eyes quickly turn to the faces of the flight attendants to measure their level of stress. A calm, composed crew will convey a relaxed demeanor to the customers. Panic, on the other hand, memetically communicates the opposite feeling.

Jesus walked on the water. He didn’t flail. He didn’t waver. He coolly and courageously strode across the waves in a way that made Peter want to join.

Clarity: Point-persons earn more trust from their colleagues when they communicate a simple, authentic, and compelling vision. They don’t hem and haw or equivocate. They don’t leave unnecessary room for interpretation. Instead, they speak in ways that make complex or daunting initiatives feel simple. Conversely, leaders who fudge their facts or leave holes in their communication leave vacuums that others will fill with their own negative biases.

When the disciples were terrified in the darkness, Jesus immediately said to them, “Don’t worry, it’s me.” When Peter expressed a willingness to join him, Jesus replied with one strong, decisive word: “Come”. No unneccesary filler, no convoluted rationale, no nervous jokemaking. Simple instructions.

A clear message wars against worry. It suggests a straight shot from the heart of the leader. Followers will always place more belief in those who “call a spade a spade” than those who ramble or try to sound more sophisticated than they are. 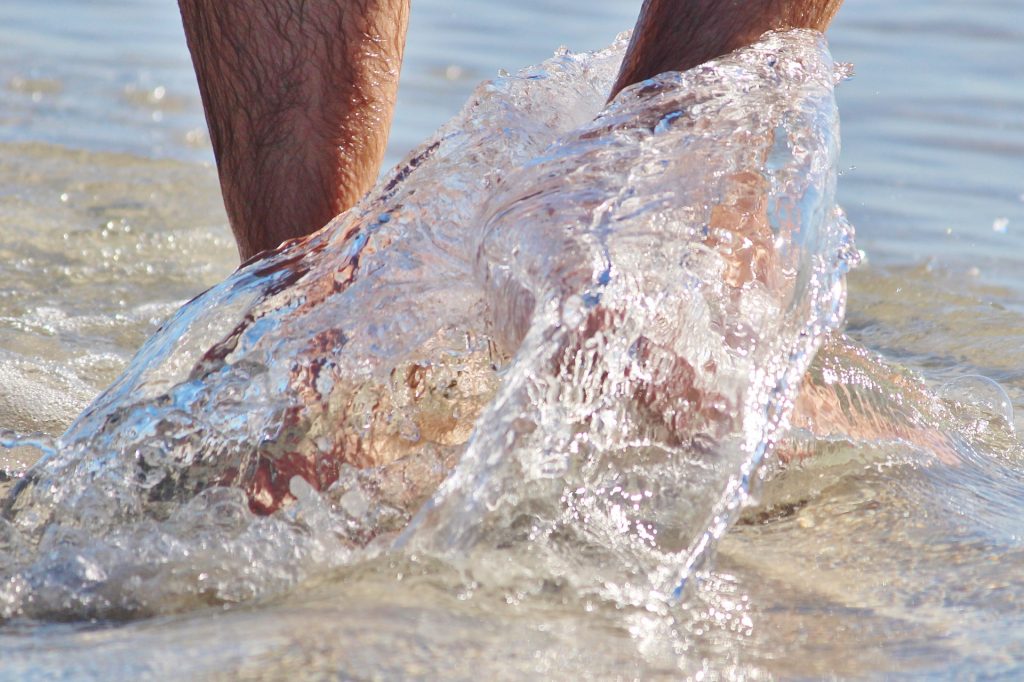 Consistency: High-factor trust requires a track record. Though short-term competence can win increments of faith, abiding trust is built only when responsibilities are met with sustained excellence. Cheap excuses and missed opportunities elevate uncertainties in followers, but repeated successes, especially when conditions vary, forge deeper levels of confidence. Reliability is the key.

Peter, who had spent many months with Jesus, knew that Jesus was capable of amazing things on the Sea of Galilee. Jesus had incredible fishing instincts. He could sleep through squalls. In time, it became clear to Pete that Jesus had control over the wind and waters. As a result, he was willing to join his master among the waves.

To demonstrate how these trust-components work, consider how the story might be different in their absence:

What if, when the disciples were terrified, Jesus hollered at them from the shore to “quit being such babies and get over themselves”? Does Peter leave the boat? Not a chance.

Imagine if Jesus said “Peter, hey, if you want to come to me, that’s your decision! I can’t say for sure what will happen, but there’s at least a small chance that you won’t drown.” Does the disciple brave the sea? Nope.

What if Jesus had said “Peter, let’s run through the physical properties of hydrogen here. Well, wait…it’s not hydrogen exactly, it’s…I guess…hydrogen and oxygen. Now, as a matter of buoyancy, the ratios are a bit ambiguous. I don’t know if I can give it to you exactly as a percentage because the decimal repeats, but I’ve heard that there might be an allegory in the maths from other kinds of particle interaction. Oh, wait, nevermind…I’m thinking of how it works on the Dead Sea. My bad…” Peter’s staying dry on the deck.

And would it really work if Jesus was just intermittently miraculous? Suppose that on the even days of the month, he were able to still storms and quiet the waves, while on the odd days disciples were known to drown and boats regularly to sink. Is anybody stepping out? No, without Jesus’ repeated demonstrations of sovereign power, Peter never leaves the dinghy.

Leaders who have the trust of their followers possess the best currency to accomplish their envisioned ends. But without careful stewardship of this commodity, without working to establish and sustain a relationship of confidence, Simon Peters don’t take chances and fishing boats remain listless in the wind.