But the lawyer wanted to justify himself, so he asked Jesus, “And who is my neighbor?”

Please won’t you be my neighbor?

For more than three decade, Fred Rogers began his show by singing that invitation.

Like millions of other children, I knew the words by heart. Every day, we joined Mr. Rogers in the warm environs of his living room. We fed the aquarium fish, rode with Trolley to the Neighborhood of Make Believe, and opened packages from Mr. McFeeley.

We delighted in those moments because we believed, all the way down, that Mr. Rogers wanted to have neighbors just like us.

No doubt Fred Rogers’ emphasis on neighborly kindness was affected by his seminary training. An ordained Presbyterian pastor, Mr. Rogers knew the scriptures and recognized that living the faithful Christian life has a lot to do with being a good neighbor.

Luke 10 unfolds the Bible’s most important story about neighborliness. According to that gospel account, a legal scholar had risen to test Jesus to determine whether the young rabbi was worthy of all the attention he had been receiving.

“What must I do to inherit eternal life?” the lawyer asked. “What will it take for me to be saved?”

Now, I can’t prove it, but I have a hunch that what the lawyer was really asking was something slightly different. I suspect that he was actually wondering about something that many of us wonder about: What is the minimum I have to do to be saved?

Jesus, following common Jewish rhetorical convention, responded to the question with an inquiry of his own: “You’re a lawyer,” he returned. “What does the Law say?”

Good answer, Jesus replied. Right answer. Do this and you will live.

Now, those of us raised on Reformed theology sometimes squint a little bit suspiciously at this point. We’re not super comfortable with any kind of conversation that suggests that we can “do” something to inherit eternal life. It is, after all, inherited. So what is Jesus getting at here?

One of my favorite people to follow on Twitter is a researcher named Michio Kaku. A physicist by training, Dr. Kaku gained a wide audience by bringing many interesting questions of theoretical science into the mainstream.

On Twitter and in other venues, people frequently ask Michio Kaku obscure, Star-Treky questions like this: Dr. Kaku, can I build a time machine and travel into the past?

I love the way he responds. Often, Dr. Kaku will say something like this: “Sure, you can travel back in time. All you need to do is fill out a parts list of a million materials that don’t currently exist. Next, assemble those to build a machine to collect store the energy of something on the order of 10,000 suns. (You’ll need to convert it, by the way, to negative energy.) Use that energy to create some antimatter and open a wormhole in space and time. Develop some method by which you can enter the wormhole, plan for the eventuality that traveling through it will rip you atom from atom, and then hope that at the other end you will end up in some sort of state where you can breathe, eat, and stand up straight. And then, sure, you can travel backwards in time.”

By describing the process by which it could be possible, Dr. Kaku is telling you in no uncertain terms that it’s not possible.

Is there something I can do to earn eternal life, Jesus?

With what I imagine to be a wry smile, Jesus gave a Michio-Kaku answer: You’re right. All you have to do is to love God with all of your, heart, soul, mind and strength. Love nothing more than God, love nothing other than God. Never, ever focus on what you want. Always make exactly the right decisions, do everything you’ve ever done for God’s glory and commit your existence wholly to love for him. Then, in the same way, turn all of the love, care, and self-preservation to have for yourself, and apply it to your neighbors. If you can do that, then, sure, God will pay you back with eternal life.

In a bit of a surprise, the lawyer doesn’t walk away floored and disappointed. Luke says that he wanted to “justify himself,” so he pressed Jesus: “Who is my neighbor?”

Point him out, Jesus, and I’ll get right to work. (Back to the whole matter about minimum effort, I suspect).

In response to this question, Jesus tells one of the most important stories ever told, what is commonly called The Story of the Good Samaritan.

The parable begins with tragedy. A man traveling from Jerusalem to Jericho is attacked by bandits in the desert. Robbed and bloodied, the man is left for dead on the side of the road. All seems lost until Jesus introduces saving hope in the form of an oncoming traveler.

I picture this moment like one of those scenes in a movie – you’ve seen them – in which searing heat rises from the desert floor to distort the visage of the approaching person. It’s all wavy and blurry, and you can’t tell who the figure represents. Who’s coming? Friend? Foe?

It’s only at the last moment that we can make out that this traveler is a priest. It’s a church leader, a holy person! We who hear the parable are relieved, because we are sure that this upstanding, God-fearing leader will provide aid to the wounded man. This must surely be the neighbor Jesus has in mind.

Except… he isn’t. The priest, Jesus says, turns up his nose and walks away on the far side of the road.

Incredibly, it happens again. This time, it’s a Levite. Now, if anybody would know about helping his neighbor, it should be a Levite. For goodness sake, that verse about loving your neighbor as yourself comes from the book of the Levites! Leviticus! But this man also sidesteps to the opposite shoulder and continues on his way.

The irony in this detail is that the word “neighbor” – in Greek, just as it is in English, where the noun comes from the word “near” – means “the one close by.” But in a twisted turn of the tale, the priest and the Levite actually went farther away from the one toward whom they should have drawn near.

They had a moral obligation to help this man. But they were too busy to stop. Probably all the church work going on in Jerusalem had just worn them out. Maybe there were other priorities. Time was short.

One of the great gifts of Mr. Rogers’ Neighborhood was its pace. In contrast to our world in which we’re forever trying to fit in more, Mr. Rogers went slowly. He talked slowly, walked slowly. At the start of each episode, Mr. Rogers stopped to change his clothes; swapping out his suit-coat and dress shoes for a sweater and sneakers signaled that he was settling in. There was no hurry; nothing was of greater importance to him than to be with us. He tabernacled in that cardigan. He had time for us. There was space, there was empathy, there was humanity.

With the priest and Levite gone down the hill, the wounded man’s situation was dire. Were there any neighbors left?

Jesus continued, and not without another surprising twist.

One of the more interesting features of the gospel parables is that Jesus often borrows many of that era’s common storytelling phrases and tropes before contorting them for maximum rhetorical effect. Luke 10 offers a striking example.

So when Jesus tells a story about first a priest and then a Levite, everybody knows what’s coming next. Down that Jericho road must inevitably come a Jew. Because it’s always Priest, Levite, Israelite.

Except what Jesus says is “Priest, Levite…Samaritan.”

The Samaritans were a tribe of half-Jewish hill-people generally despised by full-blooded Jews. The Samaritans built a competing temple, traveled different roads, and compiled their own Bible. The First Century historian Josephus says that when good things were happening to the Jews, the Samaritans considered themselves Jewish, but when things turned against the Jews, they disavowed their Israelite connections. They were opportunists half the time, backstabbers the other half. And there was bad blood all the way through.

We all have Samaritans in our lives, don’t we? There are people that we distrust. There are men and women we stand against. If you are a conservative, they’re the postmodern liberals. If you are in Black Lives Matter, they’re the people with the red hats. If you are a dreamer, it’s an ICE agent. Your mileage may vary, but there’s somebody, some group, that just makes you mad. There are certain people you just can’t stomach. Those are your Samaritans.

But a Samaritan, Jesus says, is the one who stopped to help the wounded man.

And this estranged countryman didn’t simply call the anonymous police tip line and ride off. He set aside his ethnic pride, got down into the mess, and lifted up the dying traveler. Jewish blood stained his Samaritan clothes. He poured out his olive oil and wine to bathe the bloody wounds of the man. He paid two denarii to an innkeeper and prepared to incur further debt. 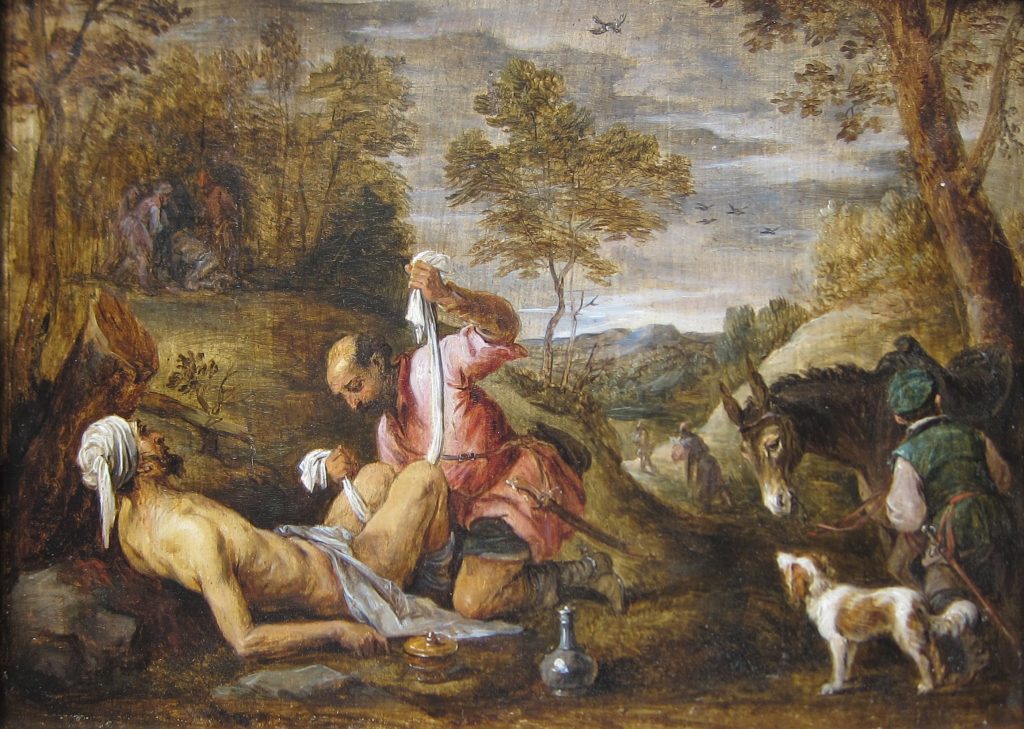 This was more than charity; this was compassion at great cost. Because being a good neighbor is never about just doing the minimum to justify yourself. It’s about becoming something new in your relationships.

Remember the lawyer’s question: “How do I identify my neighbor?” Jesus’ story reframes the discussion: Here’s what it looks like, the Teacher shows, to become a neighbor. The attorney wanted to identify his baseline responsibilities; Jesus described a wholesale remaking of the self.

Please, won’t you be my neighbor?

This is a staggering and profound parable. Think about it this way: the story of the Good Samaritan would be an effective lesson if Jesus’ point was simply that there were priests and Levites who ignored people and that we can do better than that. That’s a solid parable in itself. Our righteousness must exceed that of the righteous, after all.

It would be an even more inspiring parable if Jesus had said that there were priests and Levites who ignored hurting people but that an inspiring Jewish man found the wherewithal to cross the social boundaries and rescue a wounded Samaritan. That would have been groundbreaking; there is a certain feel-good piety that comes from patronizing people of other castes and kingdoms.

But Jesus presses further than that. What is truly shocking about this parable is that the roles are reversed: the story is about a Jew whose hope hinges on the compassion of a Samaritan.

Jesus’ parable goes all the way to the uncomfortable end: The only way to truly love our neighbors is to come to the point where you will both give and accept care and compassion from those that you loathe the most. It’s one thing to justify yourself by doing good deeds for others; is another thing altogether to admit that you require the love of your enemies.

Won’t you be my neighbor? When Mr. Rogers sang that song, he taught us the importance of asking others for their help. We need neighbors! Because while there are some things we can earn, there are others that we can only inherit. These blessings come from God and they come from others. 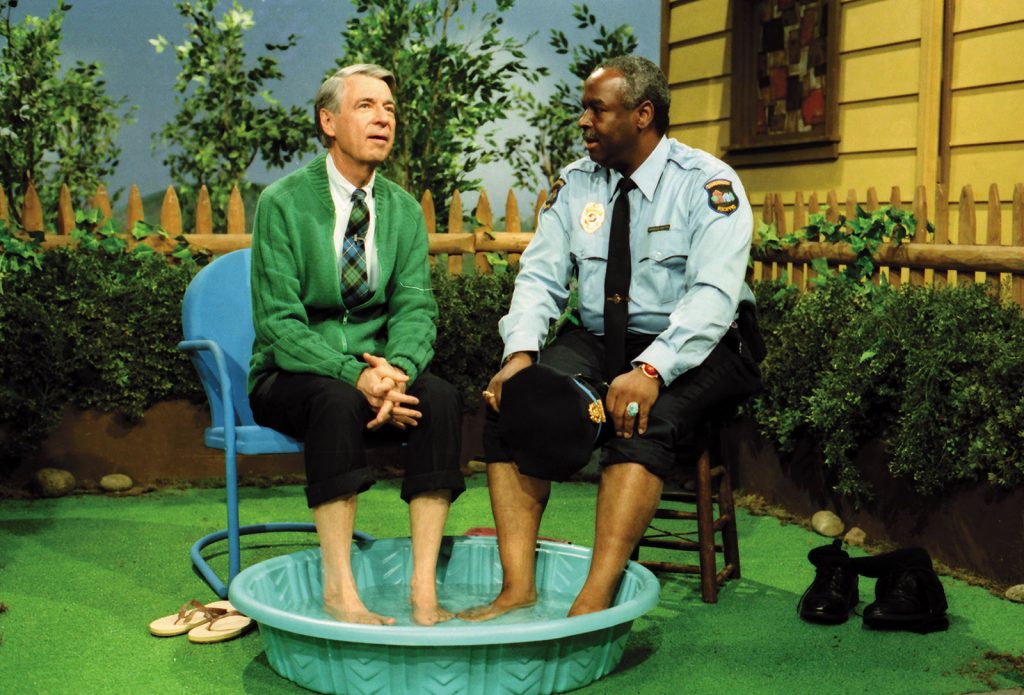 In the end, being Christian neighbors means recognizing that sometimes what we need can only be found in the humanity and grace of Samaritans. The true test of neighborliness is in the ditch, in the pain, in the desperation.

Wounded as we are, we must set aside our prejudices and live so spiritually needful that we will accept the help and grace from socialists. From minorities. From Republicans. From people we just can’t stand.

Please, won’t you be that kind of neighbor?