Through Coronavirus: An Anchor for the Soul

We have this hope as an anchor for the soul, firm and secure.

Hope. Now, more than ever, we need hope.

In light of a spreading contagion and a retracting economy, we need hope.

With loneliness on the rise and connectedness on the decline, we need hope.

As frustration mounts and patience fades, we need hope.

In every season – but especially during this historic pandemic – our hearts needs something to look forward to. We need something to anticipate. A light at the end of the tunnel. Some assurance that in the future – that in the end – things will be okay.

It’s not always easy to find reasons for hope. In Kurt Vonnegut’s 1963 novel, “Cat’s Cradle”, the main character, Jonah, is eager to read a new book that has just been published. It is a scriptural book of sorts, and it’s titled “What Can a Thoughtful Man Hope for Mankind on Earth, Given the Experience of the Past Million Years?”

But when Jonah opens the text, he finds that the entire book consists of one word: “Nothing.”

In light of all that’s going on right now, why should people find hope? Vonnegut’s tale suggests that there are no answers to this question.

The Bible scripts a different story. Both the Old and New Testaments urge hopefulness in the face of heartache and dissonance. When everything else breaks down, fades away, or grows outmoded, Scripture says, hope remains.

The Book of Hebrews was written to a congregation that needed hope. Most scholars believe that the recipients of this letter were “early adopters” of Christianity. But over time (and under pressure) some had begun to wonder if they had bet on the wrong horse. Perhaps it was wiser to return to their Jewish roots? Maybe they should consider other faith expressions? Misgivings about Jesus were a kind of “community spread” in their church.

The purpose of this letter – it’s an extended sermon, really – was to hearten the Hebrew Christians to the hope that they had found in Jesus.

In chapter 6, the anonymous writer implores the church this way:

We who have fled to take hold of the hope set before us may be greatly encouraged. We have this hope as an anchor for the soul, firm and secure. It enters the inner sanctuary behind the curtain, where our forerunner, Jesus, has entered on our behalf.

Hope is the anchor for our soul. I love that metaphor.

A bit later in Hebrews, the writer adds this line: Let us hold unswervingly to the hope we profess, for he who promised is faithful.

We need an anchor of hope, Hebrews says, because we are people prone to swerve.

Every time I hear that word “unswervingly” I’m reminded of a time when my younger brother Nate had just started to drive. Like me, Nate had learned to drive using a 1983-model Oldsmobile Delta 88. The Delta 88 was a hand-me-down from our grandparents, and, hoo boy, it looked like a grandpa car. Beige with a brown interior, our Oldsmobile approximated the length of a decommissioned aircraft carrier.  Why they didn’t put one of those accordion joints in the middle of the car is beyond me; I mean, you practically needed walkie talkies to communicate to the people in the back seat.

Anyway, Nate, who was 15 or 16 at the time, was leaving our home on a summer afternoon headed for town. And on this particularly warm day, he had rolled the Delta’s front windows down.

This was fine except for the fact that Nate had also placed a recent paycheck on the front dashboard of the car. And at about the point that he hit ten miles per hour, a gust of wind grabbed the check and blew it toward the passenger-side window.

Lunging for the paper, Nate swerved off the road and across the shoulder, winding up with the undercarriage of the car balanced on the lip of the ditch. None of the car’s four wheels contacted with the ground.; the great brown beast just rested there like a balanced seesaw.

That’s the kind of stuff that happens when you swerve.

The Bible has never cloaked the fact that spiritual swerving is a possibility. When we look at the way the world is going, we can get caught in snap-backs and 180’s. Our hopes rise one moment, only for them to crash with the next news update.

There’s no need to wear a mask to the store… Just a second; yes there is.

Go outside and get some fresh air… Except – the park is now cordoned off.

Our part of the country is safe… Now it’s not.

It’s worth pointing out that in some sense, it has been socially and medically beneficial for us to move with these changes. The COVID-19 pandemic has provided an ongoing lesson in course-correcting, and we’ve all had to make adjustments to get through.

But our hearts can’t operate like this. We can’t have the faith of a cat following a laser pointer. We need an anchor for our souls.

The Greek word translated “hold unswervingly” in Hebrews 10 is the word katechomen. It enters our English language as “catechism” – a place to discover hope and confidence. But originally, katechomen referred to something that moored a ship in place.

Ships, buffeted by the winds and the currents, are always swerving. Ever tried to get your boat on the trailer in a windstorm? It’s not easy. Against turbulent gales and rolling waves, boats require anchors.

Your heart needs an anchor, too. But it won’t be secured by a what. The anchor for your soul is a who. It is Jesus, the faithful, never-swerving one.

You know the interesting thing about anchors? They only do their work when we can’t see them work! A functioning anchor rests at the bottom of a churning sea or racing river. We have to trust in its strength without actually seeing how it happens.

This is so important to remember during our COVID crisis: Hope is not a matter of what you can see. 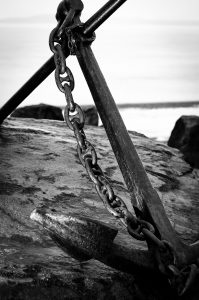 God’s purposes often lie veiled to the human eye. There is a mystery to his will. We have no idea why God loosed Coronavirus into the world.

Jesus has been behind the curtain. He has entered the Most Holy Place, sinking his faithfulness into the bedrock of God’s eternal love.

And now, rich in mercy, Jesus reaches out to us, extending a lifeline of hope into our fatigued, infected, ever-swerving world.

Readers, we’re all getting weary. We’ve been tossed by the waves of change and uncertainty. We miss our friends. We’re all ready to be done with this pandemic.

But we cannot give up hope. And we have to remember: the Anchor still holds.