So Paul and Barnabas were appointed, along with some other believers, to go up to Jerusalem to see the apostles and elders about the question.

That “question” was the first major point of division in the early Christian church. For believers across the board, it was critical that an answer come soon. For the male population, at least, it was painfully important.

This was the Circumcision Question. And emotions ran hot whenever the topic came up.

While the Old Testament scriptures had always anticipated that Gentiles would someday be gathered into the people of God (see Isaiah 19 and 60, among other prophecies), it seems to have taken the first Christians a little bit off-guard that it started happening so soon after the ascension of Jesus. Pentecost’s Holy Spirit moment meant that the good news could be proclaimed in myriad tongues and contexts, and before long Ethiopians, Romans, and Greeks were joining up with The Way.

So it wasn’t long before the question of Christian identity came up. Was Christianity a Jewish sect, meaning that you had to go through Judaism to get to Jesus? Or was it a movement unto itself? Some said the former, others argued for the latter.

The logic for the Judean “Circumcision Group” was simple. Jesus was the Jewish Messiah. His ministry and redemptive work was the fulfillment of Hebrew prophecies. In order to really appreciate, love, and follow this Jewish man, one needed to first become part of the covenant. And that meant abiding by the kosher laws and joining the family via the sign of circumcision. No step-skipping allowed.

Other leaders, especially those who were working on the Gentile frontier of the Christian movement, were more circumspect. They recognized the great sacrifices that many Greeks and Romans were already making in order to serve Jesus, and determined that circumcision and OT-style rule-keeping might be unnecessarily burdensome in light of the work the Holy Spirit was doing in their hearts and lives already.

And so Paul and Barnabas, the apostles and elders, went to Jerusalem to talk about the question. To the joy of all (and certainly, to the particular delight of the men in question) a compromise was reached that kept the surgical knife on the tray.

The Acts 15 decision, known colloquially as the “Jerusalem Council” marked one of the first essentials moments for the Christian faith. There would be many more to follow. Time after time, Christians have come together over questions of belief and practice and asked Upon what must we agree in order to maintain unity? When compromise or consensus could be reached, the believers carried on together. But when questions got too sticky and convictions were especially tightly held, the church has forked off new denominations. In 1054, disagreemnt about the relationship between the Father, Son, and Holy Spirit (among a few geographical and political sticking-points) split the church into Western Catholic and Eastern Orthodox branches. The Sixteenth Century saw issues about the authority of the papacy and the role of the institutional church divide Catholics and Protestants. More nuanced quandaries around the meaning of the sacraments and the interpretation of scripture have spawned thousands of different groups of Christians in subsequent years. The forking probably isn’t done yet.

These days, questions of sexual ethics and self-expression are among the front-burner issues that are agitating Christians. But they’re not the only ones.

In times of intense division, I think it’s important to ask like the Jerusalem Council did What are our essentials?

In that vein, I’ve really come to appreciate this diagram: 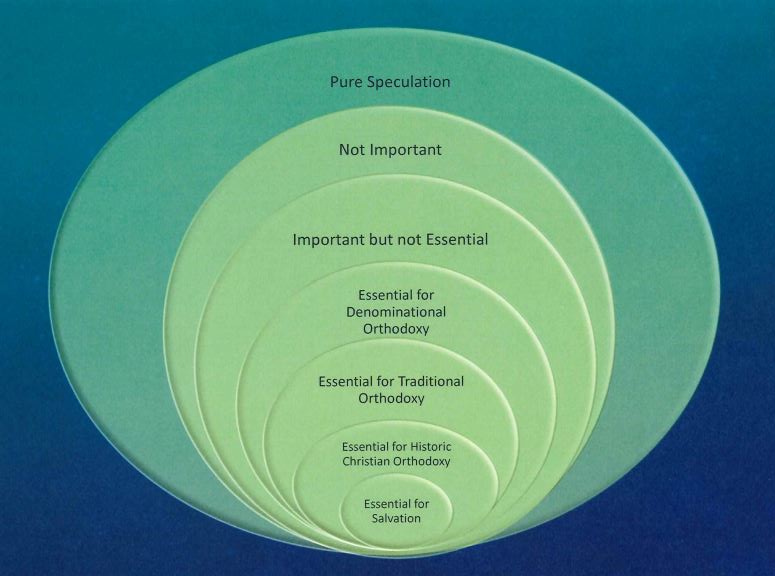 When contentious questions arise, I find it helpful to think about where, within these nested rings, a particular issue resides. Is thinking/acting this way a core issue of salvation? Does the issue reside in an outer ring? Somewhere in the middle?

Obviously, not everything can be core to salvation or Christianity becomes legalism. Moving too many matters to the periphery means permits a believer permits to do whatever she wants without thought of imitating Jesus or considering one’s neighbor. Neither packing the center nor drifting everything to the realm of speculation is faithful to historic Christianity.

What theological matters would you assign to each region of the chart? The next time you sense Christian conflict boiling a bit too hot, check out this diagram again. Is this one worth battling over, or is it wiser to stand down until more fundamental issues are at stake?