A Cactus in Alaska

Here are four images. Based only on the living things in each image, what do you know about their climates? 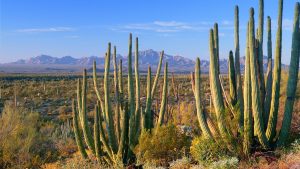 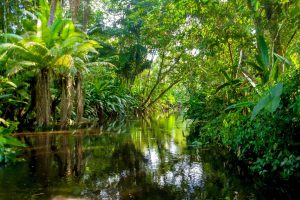 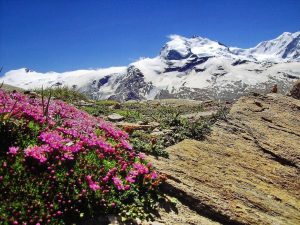 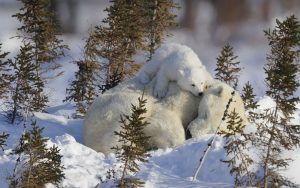 You can tell a good deal about a location by what’s growing there. Each place on earth – desert, island, glacier, or gulf – has a climate that permits certain things to thrive. Wet and warm climates favor flowers and ferns; high tundras and alpine zones are conducive to lichen and small mammals; savannas cradle giraffes and zebras.

Put another way, climates produce certain living creatures without effort. Canada grows conifers whether people plant them or not. The coral forests and tropical fish of the Great Barrier Reef system are indigenous to the waters east of Australia. These climates naturally generate certain biological outcomes.

But – to take it a step backward – what produces the climate?

Environmental science points to four long-range factors as determinative of these conditions:

These factors are ancient and mostly constant. Weather and watercourses vary only slightly year over year, and distance from the equator and from sea level are fixed factors.

As a result, what thrives (and what dies) in a given climate remains largely the same over time.

These cultures are kinds of ecosystems of their own. They cling to certain assumptions, reward specific behaviors, possess discrete values, and honor local traditions. They, too, produce a set of outcomes without effort.

Like environmental climates, human cultures are slow to change. Most have been long-entrenched and unchallenged. As everyone knows, culture eats strategy for breakfast.

The fact is, most cultures live lives that are largely unconsidered. Especially for those who have grown up in a certain interpersonal climate, the surrounding culture is functionally invisible. As Rudyard Kipling once wrote, “What should they know of England // Who only England know?”

That said, human cultures can and do evolve. While they generally resist transformation, interpersonal climates can change.

Allegorically speaking, it is possible to grow a cactus in Alaska. How does it happen?

The best place to start is to look at the fishbowl outside-in. To leave London and visit France.

This means seeing the world beyond your native cultural climate. It means crossing barriers to observe others. In doing so, you become better equipped to observe yourself.

Taking stock of your own cultural functions also means asking new (and occasionally uncomfortable) questions about your current reality. A couple of examples:

Group climate change is highly unlikely to succeed without this kind of introspection.

Might the answers make you cringe? Probably. Will they bring you clarity? Definitely.

But knowing who you are (and why you’re stuck there) is only the start. Those who wish to enact cultural change do their self-assessments, but they aren’t satisfied with the results. They burn for something better. They find more of the same untenable. They want to get off the hamster-wheel of default outcomes in order to live into grander visions.

How do these leaders deliver on culture change?

On the one hand, it is impossible to discount the extraordinary talent and relentless drive of certain individuals. Work ethic, composure, intellect, and the capacity to inspire have enabled a select set of extraordinary persons to catalyze astonishing social change. Each in their own ways, Copernicus, Martin Luther, Mahatma Gandhi, and Rosa Parks “went first” and reshaped their climates. They launched movements that quickly reached tipping points and cascaded into society. Sometimes, it’s just about a brilliant individual.

But groups of persons can do it, too. United behind new ideas and unorthodox visions, teams and boards are also capable of shaping climates.

As with ecology, four contributing factors – practices and postures, in this case – can be leveraged by leaders to breathe new life into old cultural systems. Here’s a quick rundown:

Culture change arises from what we innovate.

New and disruptive concepts, memes, and technologies often bring shifts to societies. Gutenberg’s printing press, the internal combustion engine, live television, and the iPhone are obvious examples of innovations that re-made culture. But other inventions and developments have shaped cultural climate as well. Cold-flaked cereal as a morning staple made sit-down family breakfasts less common. The Sony Walkman privatized the experience of music. Air conditioners drew people off the front porch and back inside the home.

As has been said, we make our tools…and then our tools make us.

For those who wish to change culture in small groups or large, a posture of expectant innovation is a significant instrument in social transformation. New methods, processes, and equipment send ripples through human climates, shifting how life happens and resulting in powerful new cultural outcomes.

Culture change emerges through what we narrate.

The Bible contains hundreds of ethical and theological insights, but it is the stories that stick. David and Goliath. Noah’s Ark. The Cross and the Resurrection. The Good Shepherd. These dramas have shaped the West for millennia.

Likewise, secular cultural climate pivots on narratives. These are the movies we produce, the songs we sing, and the plays we perform. These stories change vocabulary and shape the collective worldview.

A more mundane example: Watch closely and observe how much advertising is storytelling. In many commercials, there is a problem, there is a felt need, and there is a happy ending (for three easy payments of $19.95).

In a special way, autobiography is impactful. First-person testimonies arouse our common humanity.  They make us think about our own destines. They suggest hope for renewal.

Those who are curious about improving their social climates must understand the power of the narrative and increasingly share their aspirations through story.

Culture changes by way of what we celebrate.

As Chip and Dan Heath point out in their book Moments, people are moved by high-impact events in time.

This is why marches, parades, and festivals have proven so impactful. Atop churchfront platforms, on the steps of courthouses, or in other highly visible venues, reinforcing the positive (the “wins”) is a winsome way of drawing others into the cultural transformation that is hoped for.

These social events represent group bonding moments; they are occasions to celebrate how far the movement has come. Praising those who have accomplished what is longed-for and corporately cheering what is aimed-at lifts up these changes as commendable to others.

The Apostle Paul instructs the Philippian church to seek out what is excellent and praiseworthy and to think about such things. Paul knew that the believers there could grow into a new cultural reality by extolling what was virtuous and making it normative for the congregation.

Culture changes as a consequence of what we tolerate.

In a passive way, the climate of any group evolves according to what is allowed.

Imagine a coach who seeks to enculturate early arrival at practice. If the coach permits his star player to arrive three minutes late without penalty, other players will sense that the value of getting there early is not so important to the coach. The climate changes.

If a mayor tolerates profanity at a staff meeting on Monday, Tuesday, and Wednesday, the floodgates of F-Bombs swing wide open for Thursday.

By building the right kind of greenhouse, a horticulturist may actually be able to grow a cactus in Alaska. But if she leaves the back doors open all winter long, the prevailing climate will rush in and destroy what she has tried to create.

With cultural transformation, it takes a long time to inflate the balloon, but a simple pin-prick can evacuate the gains in an instant.

At the same time, leaders who hold the line on benchmarks and other aspirational values are particularly effective in transforming culture. Not only do they point to what is good, they reinforce their climate change by demonstrating that violations will be swiftly addressed.

Human climates shift glacially. There is tremendous effort required, and success is less common than failure.

But for leaders who envision the growth of new things within their organizations, a combination of new tools and processes, vivid story-sharing, group celebration, and hold-the-line firmness can converge to produce new and better outcomes for the groups that they serve.